LANDMARKS is a 12-projector 16mm film installation that examines the representation of Holocaust-related landscape—in particular, the sites of the former Nazi extermination camps: Chelmno, Treblinka, Sobibor, Majdanek, Belzec, and Auschwitz-Birkenau.

My specific inquiry emerged after a conversation with esteemed Holocaust Historian, Raul Hilberg, in February 2004. During our discussion we spoke about his appearance in Shoah (1985), and I mentioned my intentions to go to the former Nazi extermination camps represented in Lanzmann’s film. Professor Hilberg said that he had never been to any of the death camps. For him, these places are essentially “gravesites” from which nothing new about the Holocaust could be learned. Through LANDMARKS, I explore whether or not I could learn something about the Holocaust only through physically visiting these sites.

Even where the physical surroundings have transformed over the years, I found that the existence of these sites within the natural world grounds them in ordinary reality that cannot be easily communicated through documents and artifacts. The geographic physicality of these sites puts memory in a tangible space, and it is this co-existence of the appalling and the routine that my practice seeks to reveal.

During pre-production for LANDMARKS, I used a large map of Poland to chart my road trip to the six former Nazi extermination camps that Lanzmann visits in Shoah: Chelmno, Treblinka, Sobibor, Majdanek, Belzec, and Auschwitz-Birkenau. These sites form an imperfect circle on the map, and this geographic shape informed not only my travel itinerary but also the installation itself. I drove clockwise via these historical landmarks, effectively circumnavigating the southern half of Poland.

At the former camps, I used a spring-wound 16mm Bolex motion picture camera set to shoot single frames. Through using this technique, I managed to capture over 40,000 individual black and white images.

Inspired by the expansive visual treatise Lanzmann presents in Shoah, I used a motorized 16mm Beaulieu camera loaded with colour film to shoot long takes of the surrounding landscape. These panoramas of the ‘space between’ one death camp and the next show the disquietingly close proximity of these sites to civilian populations—rural communities, towns, and large cities. The spaces between these landmarks fill in some of the irresolvable gaps to an impossible narrative, while the contrasting filming techniques represent a visual post-mortem of the landscape.

I sent the colour film stock to a lab for processing, but hand-processed the black and white camp-related footage myself, using water that I had collected from Birkenau’s “Lake of Ashes.” As a last step, I viewed each individual film frame on an optical printer, and then re-photographed several thousand images.

From this footage, I created 12 separate film loops ranging from 10 to 40 feet in length—six loops to represent the six camps, and six to represent an aspect of the topographic ‘space between’ each of these sites. For the installation, I arranged 12 projectors in a circular, equidistant pattern around the periphery of a large black box theatre space, and projected the loops onto a canvas lampshade-like structure, 30-feet in circumference, that I suspended from the ceiling. The successive arrangement of the loops mirrored the geographic relationship of the camps as they appear on the map, with the loops for each camp flanked on either side by images from the surrounding ‘space between.’ 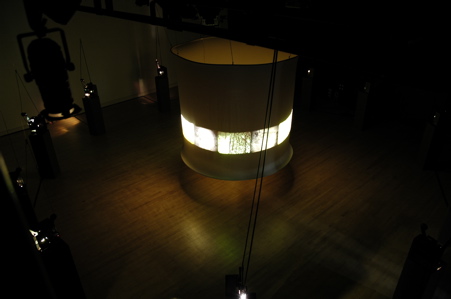 Running at 24 frames per second, the edges of each projected loop bordered the images projected on either side, effectively producing a solid band of contiguous moving images that wrapped around the giant ‘lampshade.’ The audience walked freely through the space, between projectors and projection surface, as well as under and inside the cylindrical screen.

Over the mechanical whirr of the running projectors, I played a looped audio recording of a 20-minute conversation I had with a man who served as the sole attendant at the Chelmno camp memorial museum—essentially, an old single-room house staffed by a local volunteer. Since I was traveling without a translator during that part of production, I was unable to understand what the Polish man was saying, and he could not understand me. I recorded our conversation about the artifacts that sat piled in cardboard boxes on the floor, and believe that there was something significant to LANDMARKS in our failed efforts to communicate.

The concurrence of a fragmented conversation bereft of understanding is a critical aspect of LANDMARKS. It is a dynamic that is echoed in the architecture of the piece itself, insofar as the spherical structure prohibits the possibility of seeing all of the images at once. Instead, a simple truism applies: what one sees depends upon where one is standing. Yet, even while the audio precludes connectivity, and despite the frenetic pace of the camp-related images juxtaposed against the expansive shots of the neighboring landscape, the overall piece evokes an uncanniness: somehow the parts create a whole that is appropriately unresolved. 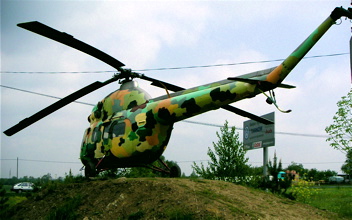